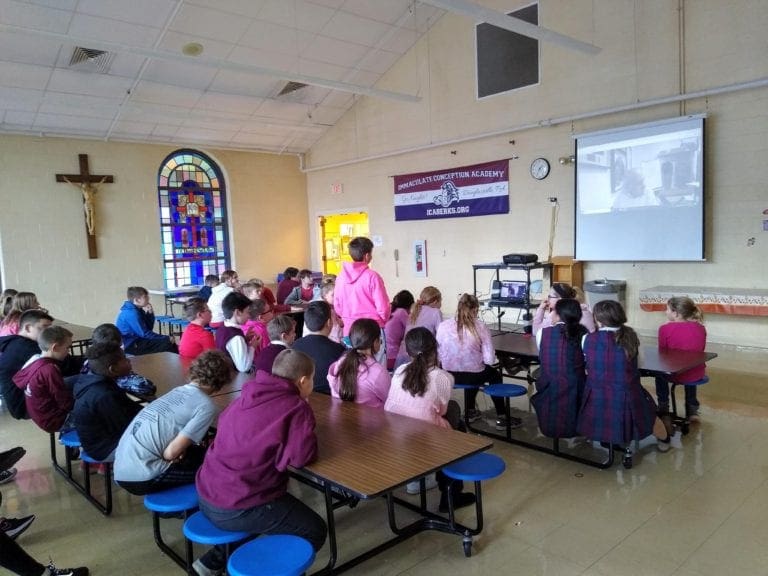 Unable to travel to tell his story any longer, Holocaust Survivor David Tuck Skyped with our fifth, sixth, seventh, and eighth-grade classes. The children sat quietly and listened to his story.

Mr. Tuck described how his life drastically changed when he was only ten years old. Germany invaded his homeland of Poland, and he and his family were deported to the Lodz ghetto. David worked for a while before being separated from his family and sent to Posen, a labor camp. He was forced to move to several other concentration camps and eventually found himself a prisoner in Auschwitz. During his time there, he worked in a factory constructing anti-aircraft guns for the German Army. He was transferred to yet another factory by a horrendous 370-mile train trip to build German aircraft. On May 5, 1945, Mr. Tuck and his fellow prisoners were liberated from this underground factory by American forces.

When he was telling his story, he had a bit of wisdom to impart to the students. “If someone is bullying you, walk away. Don’t say anything, and walk away.” … “Don’t live your life with hate.” Then he encouraged the children to stand up and ask questions. At first, they were reticent to stand up in front of the group and ask questions, but they soon warmed to the idea. The students asked things like, “Were you scared, how did you sleep, did you see your father again, did you have friends in the camps, and why did you want to come to America?” Mr. Tuck had told the children that when he was liberated, he said to the Americans that he wanted to immigrate to the US. He explained that everyone wanted to move to America. And that he still thinks America is the greatest country.

The children and Mrs. Harrigan thanked Mr. Tuck for sharing his experiences. They will spend time in class discussing what they learned and how they feel.

If you would like more information about the Witness to History Project please, contact the Holocaust Awareness Museum and Education Center at info@hamec.org.